Last week, we blogged about Philadelphia’s ban on the use of hand-held cell phones while driving. Now Pennsylvania will follow suit as local Schuylkill County legistators support a bill before the state House that would ban texting by all drivers.

In an article in the Nov. 11 edition of the Republican & HERALD, state Rep. Neal Goodman, D-123, said, “According to transportation experts, there is nothing more distractive and dangerous than texting while driving. They say that cell phone use is a close second.” 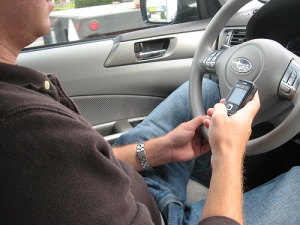 The bill, known as House Bill 2070, was approved by the House Transportation Committee on Nov. 10. Violations would be punishable with a $50 fine. Fines would double to $100 for offenses that take place in a school zone, active work zone, highway safety corridor, or emergency response area. Only motorists contacting 911, drivers in stopped traffic, or drivers with their vehicles in neutral or park would be exempt.

Goodman and state Rep. Jerry Knowles, R-124, both support the bill. State Sen. David Argall, R-29, said he voted in favor of a similar senate bill in July, and that he would support the passage of the bill through both chambers.

Just like litter laws, police may not catch everyone. But distracted drivers can be dangerous drivers, so the hope is that this new bill will make motorists think twice before texting while driving.

If you or someone you know has been in an accident with a driver who was distracting by texting, using a cell phone, or even reading a newspaper, you may have a case. Contact the attorney team at O’Connor Law today for a free consultation.