An independent medical examination (IME) is a medical evaluation performed on an injured worker by a doctor at the request of the employer/insurance company.  It is done to show that a work-related injury no longer exists, that it has decreased in severity, or that the injury isn’t actually work-related.

It is probable that at some point an injured worker receiving workers compensation benefits will be asked to undergo an IME.  Under Pennsylvania Workers Compensation Laws, if you are receiving benefits for a work-related injury your employer/insurer can request you to be examined by a doctor in an attempt to limit or eliminate those benefits.  The employer/insurer is entitled to have the injured worker undergo an IME every 6 months.

If you are requested to attend an IME it is mandatory that you do so.  If you do not attend, without reasonable cause or excuse, your benefits can be denied during the period of your refusal to attend and possibly forfeit your future benefits.

END_OF_DOCUMENT_TOKEN_TO_BE_REPLACED

Work-caused illnesses and diseases can be argued as grounds for workers’ compensation.

Last month, a Bedford, Texas firefighter won a two-year dispute over whether or not he was entitled to workers’ compensation. The firefighter, Keith Long, suffers from stage 4 colon cancer, a disease he attributes to years on the job where he has been subjected to large amounts of carcinogens.

The Texas Municipal League claimed that firefighting is not proven to cause colon cancer according to the World Health Organization’s International Agency for Research on Cancer, so ordinary life diseases should not be covered by compensation. Instead, the compensation is reserved for work-related injuries only.

END_OF_DOCUMENT_TOKEN_TO_BE_REPLACED

The certification process will give consumers more information in choosing an attorney who is better qualified to handle workers’ comp cases.

In 1995, the Pennsylvania Supreme Court ruled that attorneys could advertise that they were specialists in certain areas of law if they received certification from a court-approved body. Since then, the court approved groups to offer certification in practice areas including elder law and trial attorneys, but not workers’ comp. Now that’s changed.

END_OF_DOCUMENT_TOKEN_TO_BE_REPLACED

As Hurricane Irene barrels up the east coast this weekend, we urge our clients and neighbors to stay safe and be prepared. Our local paper, The Republican Herald, reports that Gov. Tom Corbett has declared a state of emergency in PA, in anticipation of the wind, rain, and flooding that Irene is likely to leave in her path. The hurricane is expected to affect the eastern half of the state.

Pennsylvania could see as much as 7 inches of rain in the Philadelphia area that could cause the Schuylkill River and other bodies of water to flood, according to CNN.com. As a result, the National Weather Service in State College has issued a flash flood watch for Schuylkill, Lebanon, York, and Lancaster Counties from Saturday evening through Sunday morning.

We’ve listed a few websites below where you can find the most up-to-date information on the storm, as well as helpful tips to keep you safe as Irene passes through our area. From everyone here at O’Connor Law, stay safe this weekend!

END_OF_DOCUMENT_TOKEN_TO_BE_REPLACED

Attorney O’Connor was featured in the May 25 edition of USA Today as one of the Legal Elite. Read more about it in the following article by Jonathan Widran.

“Michael J. O’Connor Returns to Pennsylvania to Become One of His Home State’s Top Workers’ Comp Attorneys”
When it came to pursuing his career in law, Michael J. O’Connor could have easily established himself as a high powered attorney in almost any area of expertise.

Instead, the son and grandson of working union men chose to return to his roots in Pennsylvania and devote his career to helping injured workers obtain workers’ compensation benefits, as well as defending against insurance companies attempting to terminate, suspend or modify lost wage benefits.

Growing up, O’Connor experienced first-hand the struggles of working class people. His father worked for Alcoa, the world’s top aluminum manufacturer for 35 years, and was leader of the local union and head of the Job Evaluation Committee. O’Connor’s great grandfather was killed in a mining accident. He was repeatedly told stories about the trials of his grandmother’s childhood of not only losing a father at a very young age but also her family’s only source of income. He had many other relatives who were injured in industrial accidents and had to battle through the workers’ comp process.

END_OF_DOCUMENT_TOKEN_TO_BE_REPLACED 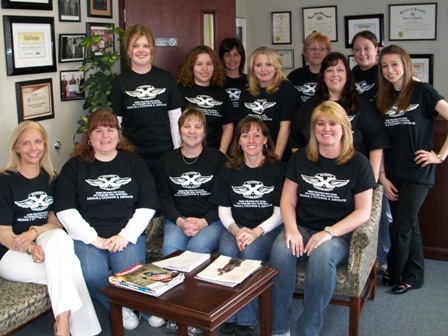 Nearly 2,000 motorcycle enthusiasts revved their engines along with the staff of O’Connor Law at the Reading Super Swap 2011 on March 27 in Reading, PA. The motorcycle and parts swap is an annual indoor showcase that took place at the Greater Reading Expo Center.

The event was sponsored by the law offices of O’Connor Law. Over 200 motorcycles were displayed, from classic rides to re-cycle cyles to new models. Attendees received door prizes and cash awards were given for custom bikes.

In support of the event, the staff of O’Connor Law wore t-shirts with the Super Swap logo, as shown in the photo above.

END_OF_DOCUMENT_TOKEN_TO_BE_REPLACED

It is with great pride that the attorneys at O’Connor Law, LLC announce that Attorney David A. Miller has been selected as a Pennsylvania Rising Star in the field of personal injury.

Pennsylvania Rising Stars, as published in the June 2010 edition of the Philadelphia and Pennsylvania Super Lawyers magazines, represent the top 2.5% of attorneys across the state. To be eligible for selection as a Rising Star, an attorney must be age 40 or younger, or in practice for 10 years or less.

Rising Stars recognize the top up-and-coming attorneys in the state. The Pennsylvania Rising Stars for 2010 were selected from the results of an extensive nomination and polling process conducted by Law & Politics and published in the June 2010 issue of Philadelphia magazine and in Pennsylvania Super Lawyers – Rising Stars Edition. This is Miller’s second year to make the Rising Stars list.

END_OF_DOCUMENT_TOKEN_TO_BE_REPLACED

For the seventh year in a row, Michael J. O’Connor, founder of O’Connor Law, was selected and named as a Pennsylvania Super Lawyer in the field of workers’ compensation law as published in the June 2010 edition of Philadelphia Magazine as well as the recent edition of Super Lawyers magazine.

In addition to Mr. O’Connor, Attorney Paul J. Duffalo was named to the list this year.

Attorneys named Super Lawyers are considered to be the top five percent of attorneys in each state, as chosen by their peers and through the independent research of Law & Politics. O’Connor was named a Super Lawyer in 2004 and each year following, making this his seventh year in a row to top the list of workers’ compensation attorneys in Pennsylvania. This is Duffalo’s third year to make the list.

To be named a Super Lawyer, an attorney must first go through a rigorous three-step process that begins with a nomination by his/her peers. The nominations occur on ballots that go out to all lawyers throughout the state who have been in practice for at least five years. These nominations are to be based on personal observation rather than solely on reputation.

O’Connor’s seventh consecutive Super Lawyer designation makes evident his continued determination to uphold an outstanding level of legal representation. Duffalo has been recognized for his success and hard work for the third year in a row, and will undoubtedly continue to be named to the list in the coming years. His dedication to injured workers is recognized amongst his peers and demonstrated in his professional achievements.

END_OF_DOCUMENT_TOKEN_TO_BE_REPLACED

In January, Oprah Winfrey began a campaign and launched a public service announcement to end distracted driving. Today, April 30, is the first national “No Phone Zone” Day, an effort to break Americans of the deadly habit of talking or texting while driving, a habit that kills nearly 6,000 people a year, according to the National Highway Traffic Safety Administration.

“A call or text isn’t worth taking a life,” said Winfrey.

On Friday’s show, Winfrey will interview Jacy Good of Lancaster County, who lost both her parents when a tractor trailer driver who was talking on a cell phone drove into the path of their car.

END_OF_DOCUMENT_TOKEN_TO_BE_REPLACED

In an effort to be as responsive to our clients’ needs as possible, the law office of O’Connor Law has added a live chat feature to our website (www.oconnorlaw.com). Now if you have a question at any time of the day, you’ll be able to reach us through a simple click of the mouse. Let the experienced attorney team at O’Connor Law get you the justice you deserve.